After a bridal shower in Houston, we were off for Memorial Day weekend! Barley was clearly stoked.

We got in fairly late Saturday night and met up with Dan’s parents at Cultures Bar. Pretty typical bar/grill with a good beer selection and ice cold mugs. Bonus points for icy mugs. Dan needed a cold one after how intensely he had to concentrate, driving through all the rain! Dan’s mom had made dinner reservations at The Nest, which was just divine. It’s in an adorable old home, a few blocks off Main Street with the perfect amount of lighting and the most affable servers. We had a French grandma who was a hoot! Not to mention the quality of the food, which all of us agreed was top notch. Dan and I both had seafood (scallops and shrimp) while his Dad had the filet and his mom tried the quail. We finished the night with a chocolate martini, because when you’re with Ann, chocolate is a requirement 🙂

We stopped by House Wine on the way back to the hotel and they let Barley come in and hang out. He loved it, of course. 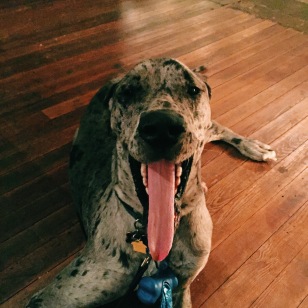 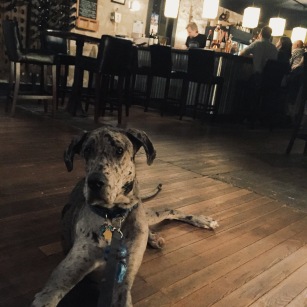 Sunday morning, the sun came out and we were all surprised at what a beautiful day it was! Luckily, El Milagro has a charming patio with a fountain where we ate breakfast and enjoyed the weather. Note: only 1 breakfast taco is necessary. Barley mostly enjoyed chasing the birds and debating drinking the fountain water.

Later on, we met up with some of my best friends from home for lunch at Fredericksburg Herb Farm in their Farm Haus Bistro. The cutest, with a big garden in front! I was also shocked at how affordable it was too! The weekend was definitely full of good food at new places. You can stay in the most precious cottages on the farm too. Maybe next time 🙂 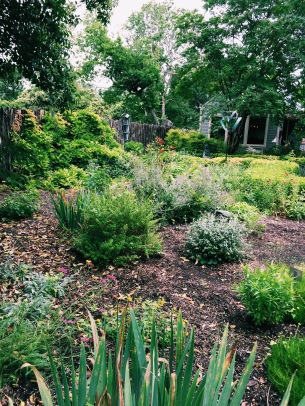 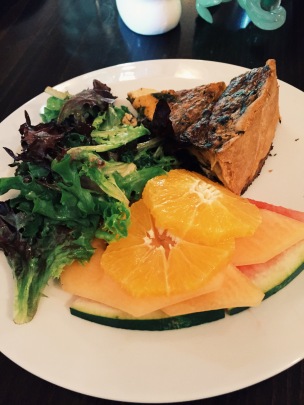 Afterwards, we just had to hit up some wineries… because when in Fredericksburg this is a must. First up was Hilmy Cellars. I had been wanting to go back because of the good wine, but mostly for the cute wine dogs 🙂 No sighting of them that day, but JB made friends with the rooster out on their gorgeous patio and we had a guinea sighting! A view of vineyards makes for excellent scenery.

Then we were on to Grape Creek to meet back up with Dan’s rents. They have been wine club members there for a while and I have to agree that it’s the most beautiful winery in Fredericksburg. Best to just buy a bottle (or 2) and sit and enjoy. The live music wasn’t too shabby either!

We headed on to Johnson City that evening and had dinner at Pecan Street Brewing. Not that there are many other options in the small town, birthplace of LBJ with a population of 1,700. We were seated in the front and scarfed down our brick oven pizza. Then, I saw a sign in the back pointing to games & dancing! Through the door it was a totally different restaurant. Garage doors pulled up to let in the warm air, a big band playing country classics, and locals two-stepping across the dance floor. They also had a huge loft with pool tables, shuffleboard, and folding chairs galore. Even though the boys got fairly competitive at the shuffleboard table, it was a blast. Dan even swept me around the room while they played the last song of the night and it was the best. Just have to get a few beers in him to get him dancing 😉

The next morning we visited some re-sale/vintage shops where Joanna Gaines gets some of the things she uses on Fixer Upper! They were pretty awesome and I could definitely see the potential  of a lot of the pieces. My favorite was a wooden trough, but it was $300, which was a little expensive for a centerpiece. Dan’s mom was able to find some awesome doors to use as a countertop on their kitchen island, and gorgeous sliding barn doors! Successful trip for them! 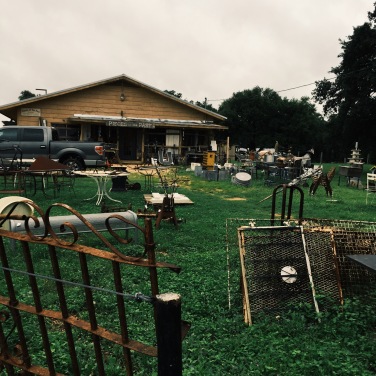 One thought on “Memorial Day Weekend in the Hill Country”