In order to really experience the Italian countryside, you need a car to get around. We picked up our rental car, a Fiat Panda, at the Florence airport and had a slight panic attack when Dan straight up didn’t fit in the car. After pushing the seat back as far as it would go, his head was touching the ceiling and his knees were up at his elbows, no joke. We went in to see if we could get a larger car but it was going to be significantly more expensive to upgrade. We headed back to the Panda to debate… and then Dan found a magic lever that further moved the chair back! Phew. Off we went.

On our way, we stopped in San Gimignano, which we had a lot of fun learning how to say. This is the most charming town and was packed with visitors! But it’s a hit for a reason. We started the day off with lunch overlooking the Tuscan hillside and spent the afternoon walking the streets and eating gelato. It was the first of many walled, hilltop towns that we would explore over the next several days and maybe my favorite. 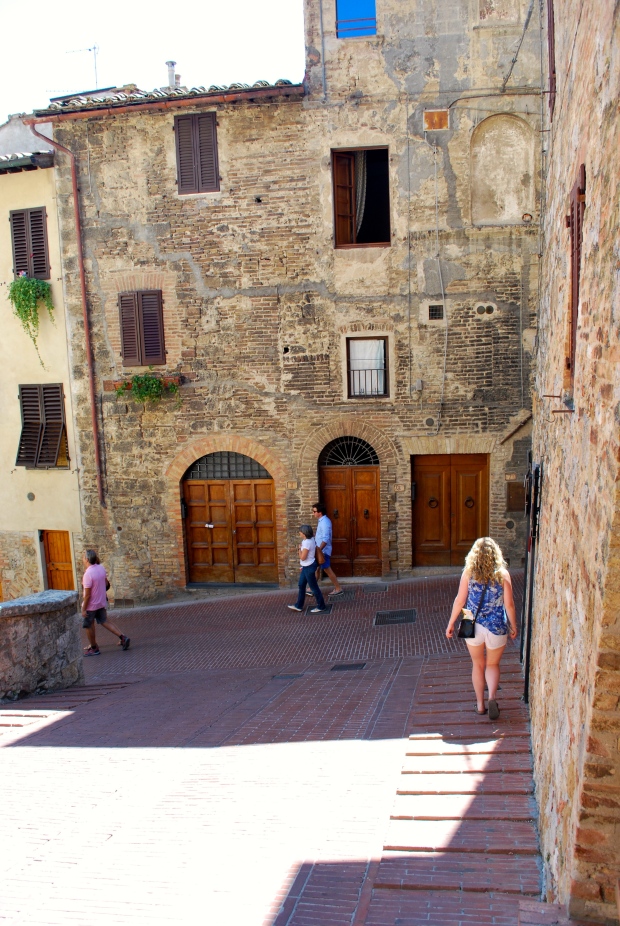 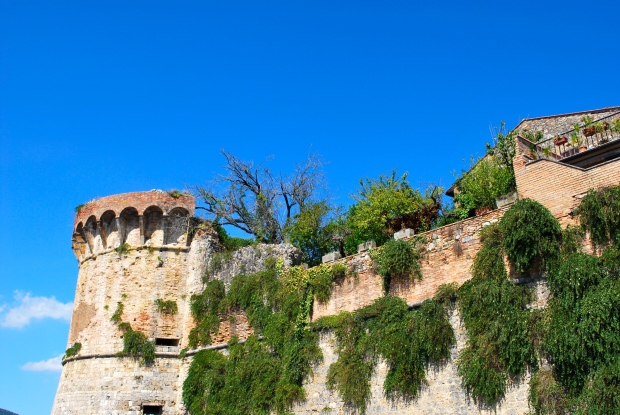 I researched hundreds of places to stay, no joke. There are SO MANY options! But, many require a week long minimum and others can be quite pricey. With our $100 budget, I was looking for a place with history, a nice view, and a pool. Oh man did we enjoy having a pool. We ended up at Foresteria il Giardino, about 20 minutes from Arezzo. It is smack dab in the middle of a working orchard in a building from the 1700’s. We stayed in what used to be the tabacceria. There was even a truck that came by each morning with fresh baked goods! When we arrived, we were greeted by the sweetest woman who gave us a handdrawn map of the area and circled the few places to eat with 15 minutes of us. This was the beginning of no air conditioning and very limited wi-fi for the next week. FYI, Italy in late August isn’t much cooler than Texas. 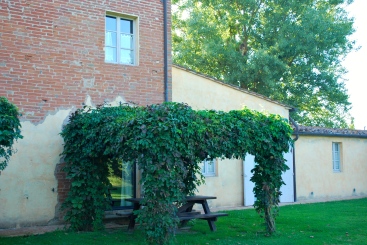 After we settled in, we went over to Civitella to take in the sunset, took a dirt road down the side of the mountain, and ended up at a butcher’s shop for dinner and the best biscotti ever. 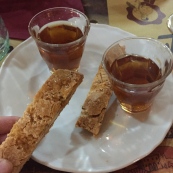 In the morning, we drove out to Siena without a plan, which may have been a bad idea! We kind of just roamed the town and ate some food. The was a church there was stunning! But aside from that, the drive was a bit long to justify the trip. We probably should have stayed by the pool all day 🙂 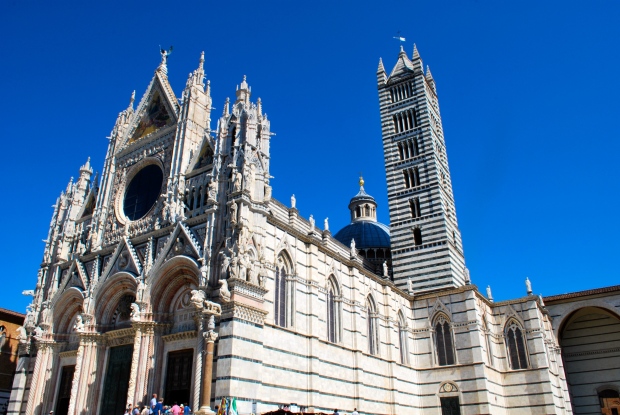 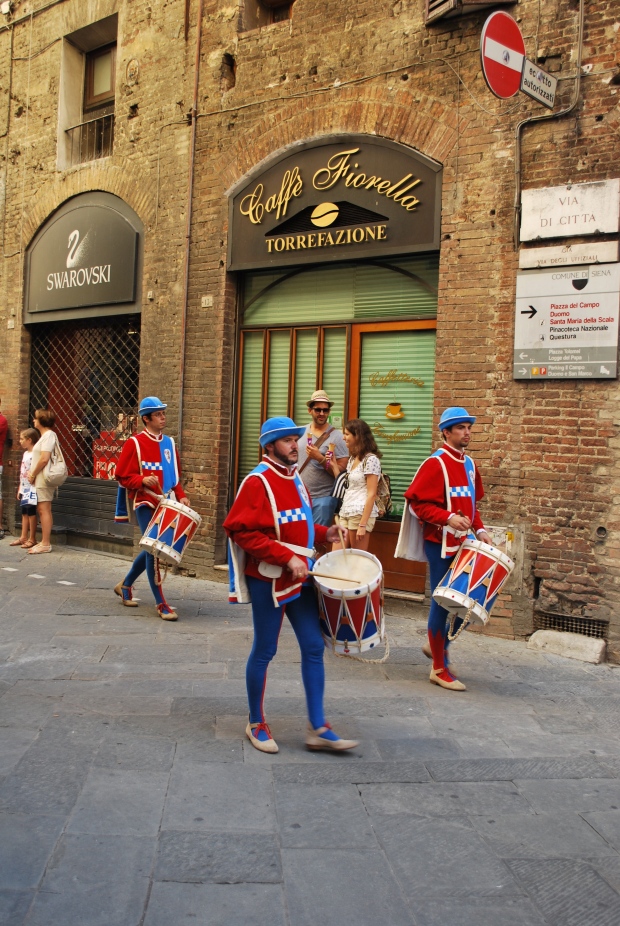 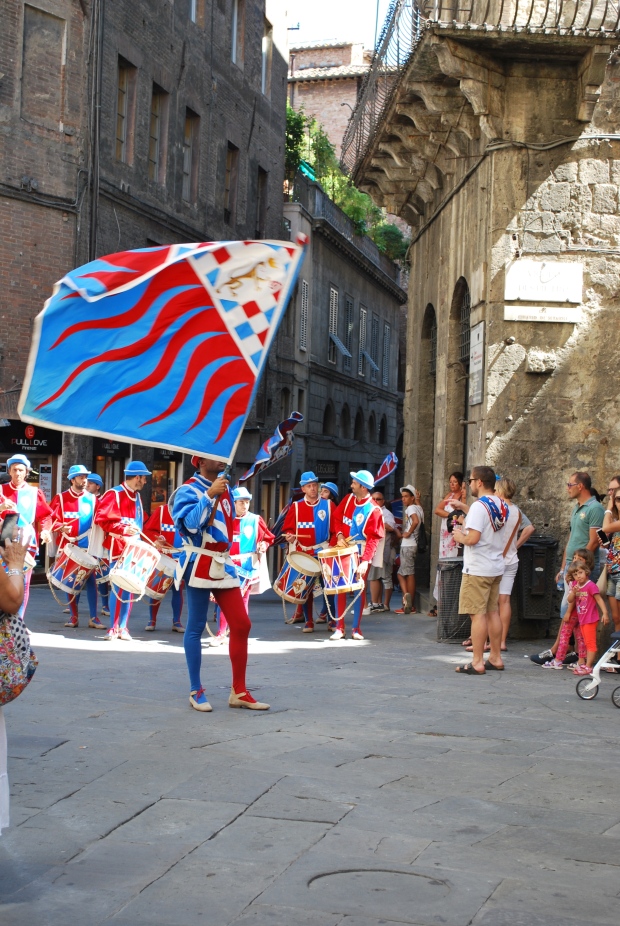 To celebrate on our actual anniversary, we just bought some food at the local grocery store and cooked up an Italian meal in our kitchen. Almost felt like we were at home 🙂 We dined at the picnic table outside our door and reflected on the last year of marriage, soaking in how lucky we both felt to have each other. The answer- very, extremely, lucky. 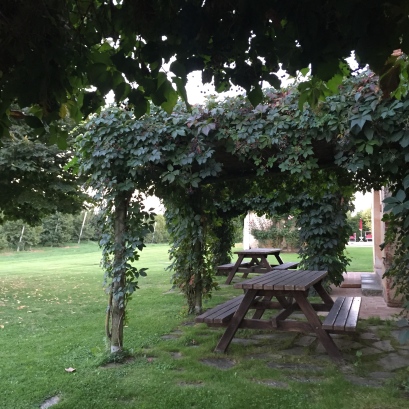 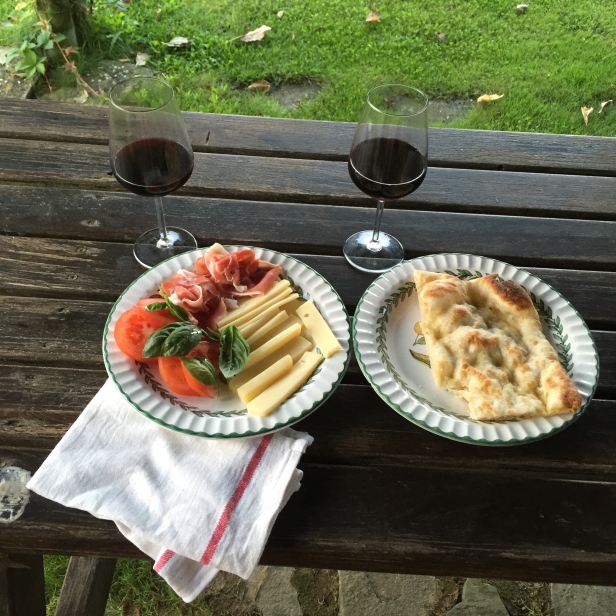 The next day, we spent the morning in Arezzo and the afternoon in Cortona (where Under the Tuscan Sun was filmed). Arrezo felt much more like a real city after the tiny towns we’d been in- shopping and people and flags! Then Cortona was just beautiful. We somehow ended up walking all the way to the top… in not great shoes with the sun beating down our backs. Dan and I kept seeming to work long hikes into our days, not on purpose! 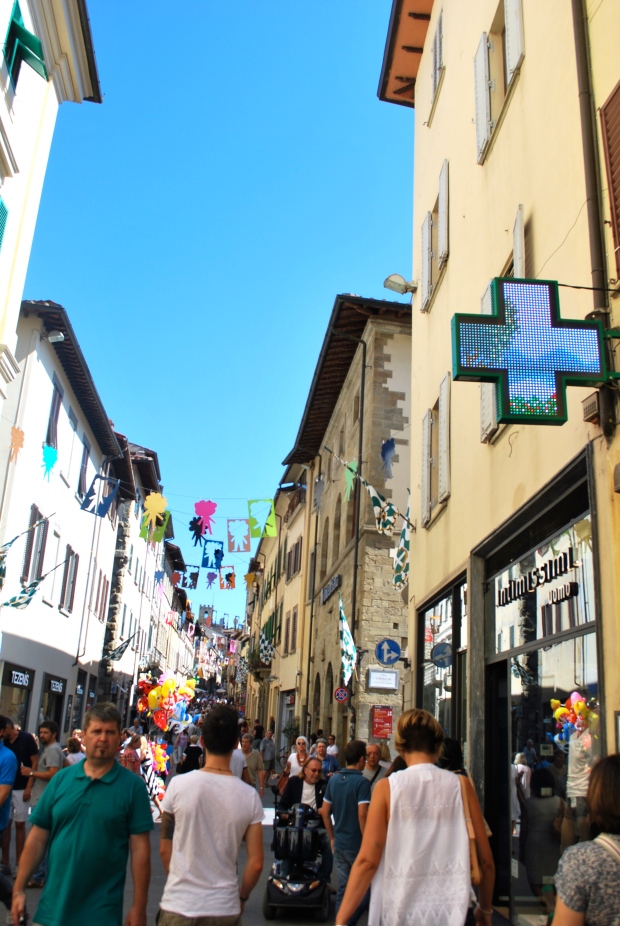 One of the best evenings of the trip was a tour of Baracchi Winery. So glad this was recommended to us. It ended up being just us and a Cardiologist from Brazil, who knew much more about wine than we did, with a personal tour by the owner. They make a sparkling rose out of sangiovese grapes that was fantastic- we brought some home and I can’t to open it. After the tour, we had our wine tasting on the patio with charcuterie. When it came time to open the rose, the owner proceeded to pull out a sword… then told me I would be doing it! Of course, I somehow managed to break the bottle, which he said he’s never seen happen. Of course. He said it had to do with the bottle being bad, not me. Still embarrassing. I did succeed on the second try ☺ 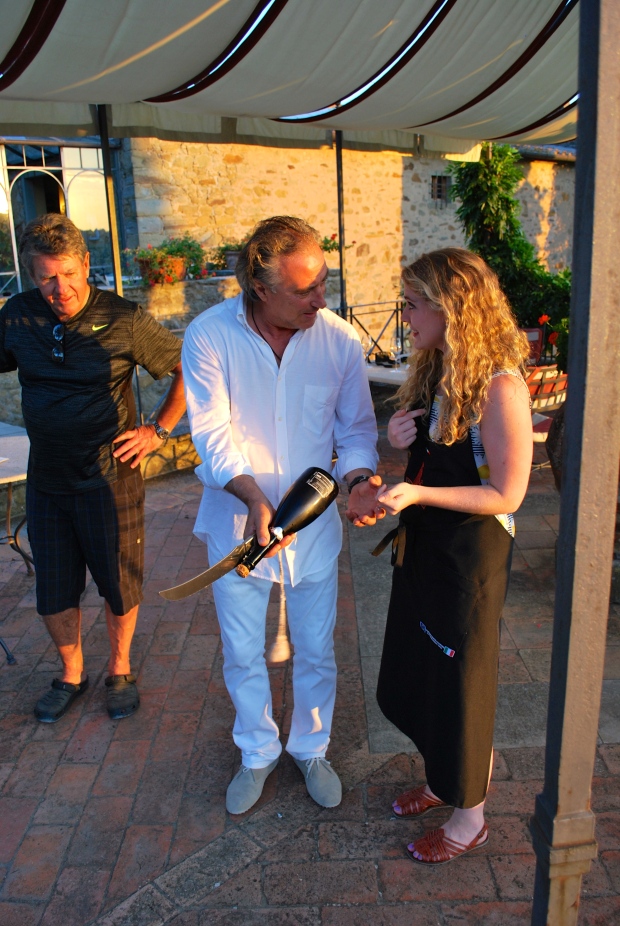 On our last magical day, we did a winery tour at Palazzo Vecchio in the Montepulciano region, followed with a homemade lunch. We just died more and more with every dish they brought out. My goodness, the deliciousness was out of this world. They gave us their recipe for the sage bread but Dan and I have yet to try it. These pictures are going to make you hungry… be warned! The winery had served many purposes in it’s past, including a convent and an orphanage and the grounds were just gorgeous with the typical stunning hillside views. We also had a couple friends join us for lunch in the form of 2 sweet labs. Dan and I were really missing Barley, so we loved their company 🙂 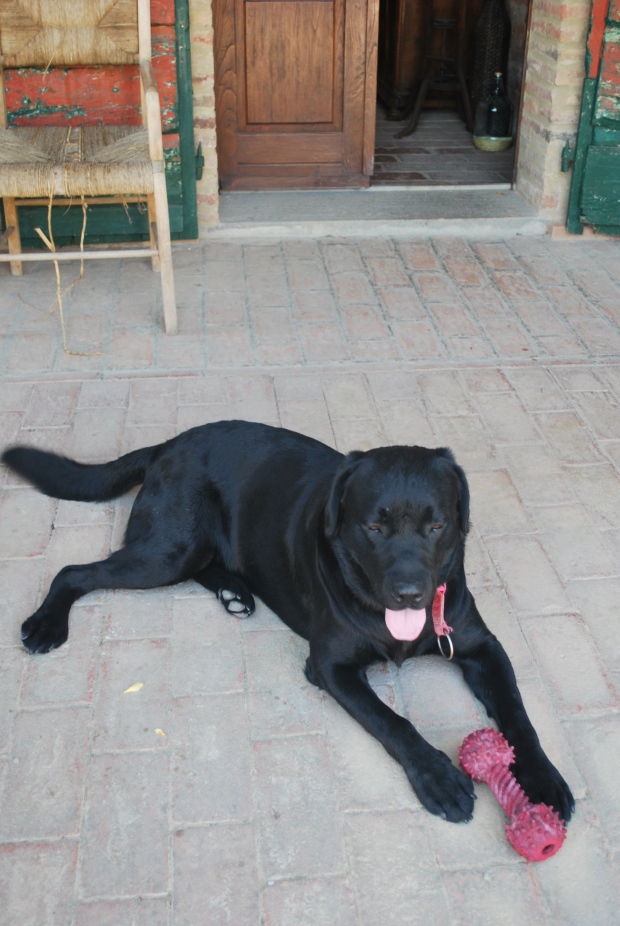 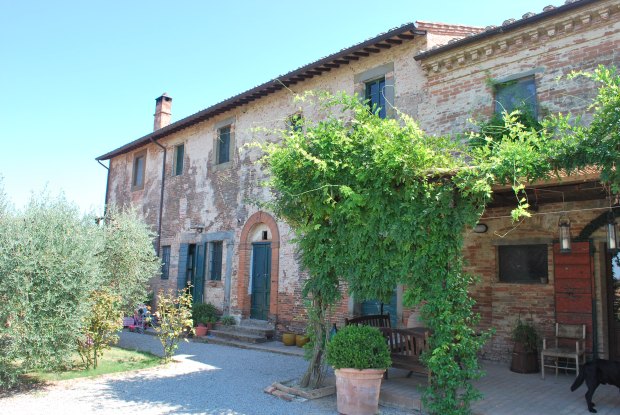 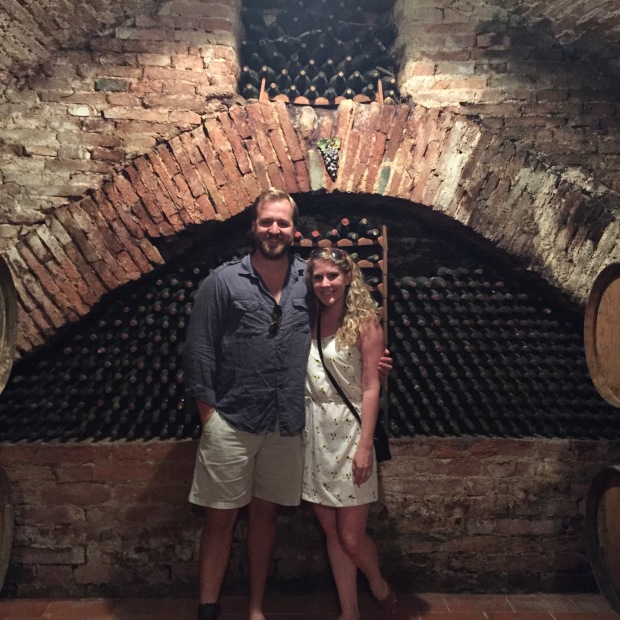 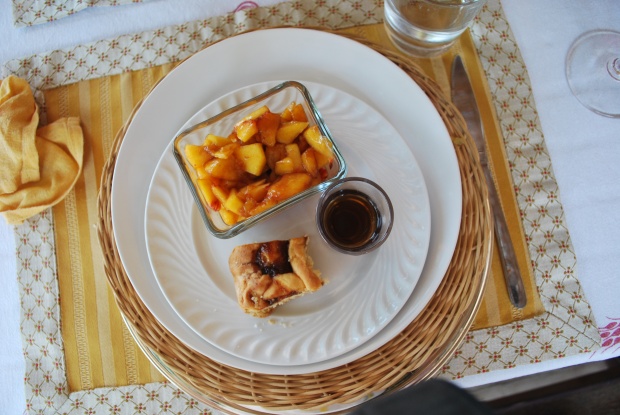 Then that night, we were beyond spoiled again!! The place we stayed prepares dinner one or two nights a week but it depends on whether there are enough people staying. Thank goodness it ended up happening, because the food was fantastic. Each couple had a table set up for them on the patio with candles and the sunset in the background, making it incredibly romantic. This was definitely a full day of eating. We were bursting at the seams in the best possible way. 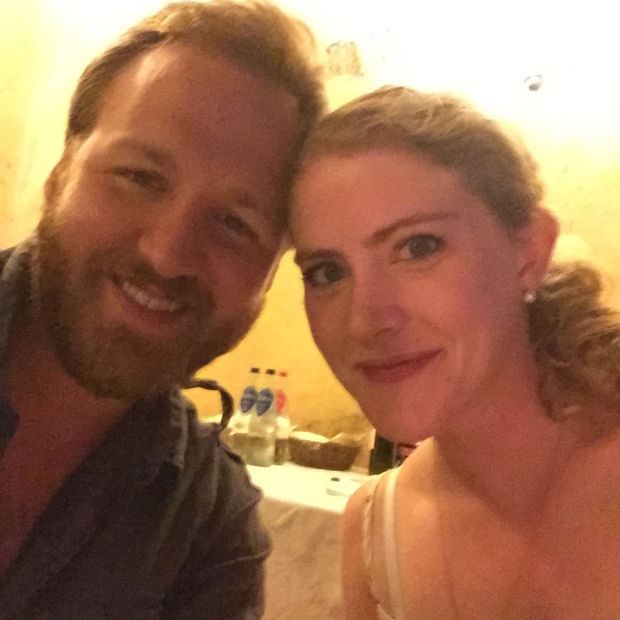 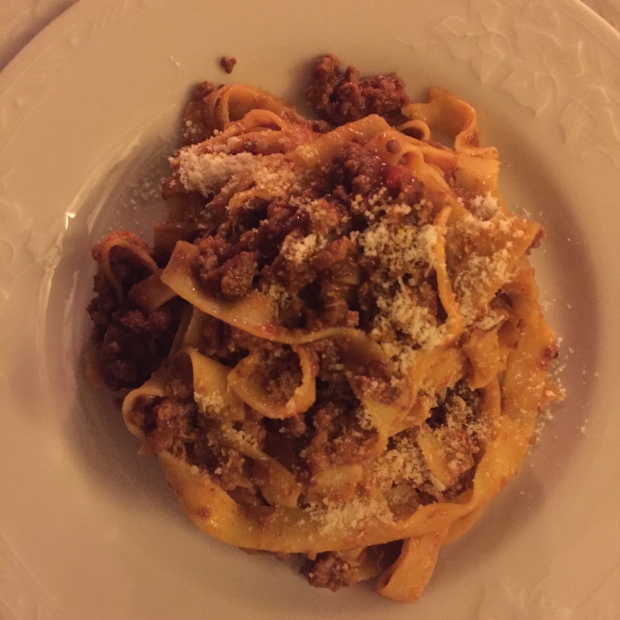 We were so sad to say goodbye to this little slice of paradise. It worked out really well to have a slower pace in the middle of the trip to give us some relaxation. What I would give to be laying by that pool again…

OH and for lunch on our way out, we stopped at the best winery of the trip- Avignonese!  We brought back a bottle of their merlot but seriously debated splurging on the 50&50.

One thought on “Tuscany”